Inflation just hit the Federal Reserve’s target of 2% for the first time in six years, a sign the economy is picking up speed after a long period of low and slow growth.  Since we’ve had very little inflation over the past decade, I recently published a blog on our website about the impact of inflation on long-term financial security - really a primer/reminder on the importance of building investment portfolios to hedge the effects of purchasing power erosion. (read it here: https://sonderwealth.com/latest-blogs/the-impact-of-inflation-a-primer ).

This news brings to mind how inflation affects families over time.  For example, the rates of inflation for education and healthcare are much higher than the overall rate of inflation in our economy (as measured by CPI).  And while the funding of education for our children is a finite endeavor, funding our healthcare needs is not.

Like an old car that has ever-increasing repair needs, maintaining our health as we age requires ever-increasing health care consumption.  Here in America, our healthcare costs are the most expensive in the developed world.   For instance, the U.S. pays more for doctors and drugs than in 10 other developed nations.  On average, Americans $1,443 per person on pharmaceuticals, compared to the average of $749.  Moreover, the average annual earnings for general physicians is $218,173 – nearly double the average across all high-income countries.1

While the healthcare and health insurance landscape in the U.S. is an enormous issue, let’s break it down into a smaller bite: This paper will address the anticipated costs of Medicare Parts B and D, it’s longer term impact on your retirement income, and how you can best plan now to achieve financial security during your retirement years.

Medicare Part B:  Doctor and Outpatient

According to the 2018 Medicare Trustees Report, Medicare Part B premiums are estimated to increase by about 8.2% each year over the next 5 years, after increasing at an average annual rate of 5.5% during the last 5 years.  It’s important to know Medicare premium increases are based on the per-capita cost growth of Part B benefits, which reflects the growth in the cost and utilization of medical care by seniors, and not by CPI.  These factors have historically grown faster than inflation.

Even though seniors who have their Part B premiums deducted from their Social Security income each month are protected by the “hold-harmless provision”, which provides some (not total) protection against increases in the Part B premium, the rule does not apply to Part D (prescription drug coverage) premiums.  The bottom line here is that you can count on any cost of living increase you receive in your monthly Social Security income at retirement will be used to pay higher Medicare Part B premiums.  And you can expect a larger portion of your total Social Security benefit to be consumed by increases in Part D premiums, and Part B and Part D deductibles and co-pays. 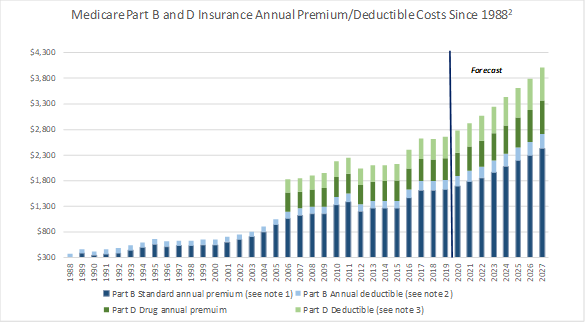 Further increasing the financial burden on retirees, there has been an ongoing shift from providing care in inpatient/hospital (Part A) to outpatient settings (Part B).  Since Part B expenditures are funded in part by supplemental Medicare insurance premiums, we can expect a greater portion of Medicare spending to be covered by seniors through their supplemental coverage premiums, deductibles and co-pays.

Since 2005, Medicare deductibles have also been increasing each year by the average Part B insured’s health care expenditures, and not protected by the hold-harmless provisions or by other statute.  Since 2005, there has been about a 4.3% annual increase in the deductible amount for Part B, and a 4.1% annual increase in the Part D (prescription drugs) deductible.  It is projected that future increases will grow on average at rates approaching 5% per year.2

Prices for drugs in America have risen greatly over the past decade, but even more so for those most commonly prescribed to seniors.  In 2015 alone, the average retail prices for 768 prescription drugs widely used by older Americans—including 268 brand-name drugs, 399 generic drugs, and 101 specialty drugs—increased 6.4% compared with a general inflation rate of 0.1%.  Increases on brand-name drugs were even higher, with retail prices for brand-name drugs widely used by older Americans increasing by an average of 15.5% in 2015—marking the fourth year in a row with a double-digit increase.3 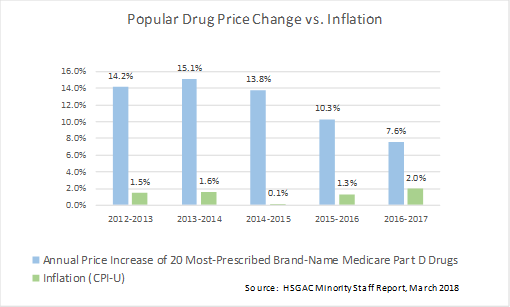 Clearly, seniors are at a significant disadvantage when it comes to prescription drugs.  Not only are older Americans probably taking more medications, the ones they most commonly take have had the greatest price increases over the past five years.  The implication is the cost for Part D insurance coverage will likely also increase at a rate greater than inflation to keep up with higher drug prices, thereby becoming a factor that pushes up the cost of living for seniors.  The 2018 Medicare Trustees report estimates that premium increases for Part D drug coverage will increase at a rate exceeding 6% over the next five years.

The 2018 Medicare Trustees report indicates the fund that supports Medicare Part A expenditures will be depleted by the year 2026, assuming constant cost growth and utilization.  Part A is funded primarily by payroll taxes (currently 2.9% - employers pay half, and you pay half (1.45%)), and by taxes levied on Social Security income paid to high earning beneficiaries.  The decline in the funds that support Part A expenditures is attributable to the recent tax cuts and low wage growth, paired with higher hospital administrative costs and an increasing number of retirees.

The Medicare Trustees observe that unless the Medicare payroll tax rate is increased from 2.9% to 3.72%, or that spending on hospital services drops by 17% immediately, the program will only be able to support expenses to the extent revenues are received beginning in 2026 – eight years from now.  While not currently impacting retirees, it could be an issue for those still in the workforce sooner rather than later, as we may be facing higher payroll taxes to avoid a calamity.

Amazon to the Rescue?

You may have heard about a new not-for-profit joint venture between Amazon, JP Morgan Chase and Berkshire Hathaway to create a new health care system for their combined 1.2 million employees.  They recently named Atul Gawande, who is a surgeon, writer and a Harvard professor of medicine to lead the yet-to-be-named concern.  They will focus on ways to reduce excessive administrative costs, high care prices and improper care (under/overuse of certain drugs and therapies).  Should they succeed in building a new system for their employee base, the plan might be replicated to reach more Americans.

While there is no telling how long it will take for this three-way venture to become operational, successful and available, it seems help in controlling the cost of drugs may be imminent. Just last week, Amazon announced the purchase of PillPack, a New Hampshire based company that provides mail order custom medication packaging by the dose.  It’s not the first foray into the health care industry for Amazon.  They already sell over-the-counter medicines and has launched its own line of generic medications call Basic Care last year and wants to expand their medical supply business (think face masks and swabs) into supplying hospitals and clinics.  If Amazon’s impact on books and retail is any indication of what’s to come, it’d be a good bet that drug prices may soon be coming down.

How We Can Help

In addition to having hope for a better future, planning ahead is always a good practice.  We know that because of the effects of inflation, our clients will need to have meaningful financial resources beyond Social Security income benefits to support their retirement living needs.  Our approach to building retirement plans has typically been centered around financial projections that include conservative future growth rates for investment portfolios and income sources, and a higher-than-expected inflation rate on living expenses.  We also downplay Social Security income benefits, as we anticipate those dollars will be allocated to healthcare needs on an ever-increasing basis.

With regard to portfolio construction, combining the right mix of growth and risk management assets may help to blunt the effects of inflation and grow retirement resources over time. Remember, however, that inflation is only one consideration among many that investors must contend with when building a portfolio for the future. The right mix of assets for any investor will depend upon that investor’s unique goals and needs.

With our tools and expertise, we can solve for what you’ll need to be saving today, and how you should invest those savings so that you’ll be financially ready for what may come during retirement.  Call or email us – we’d love to help you and yours!